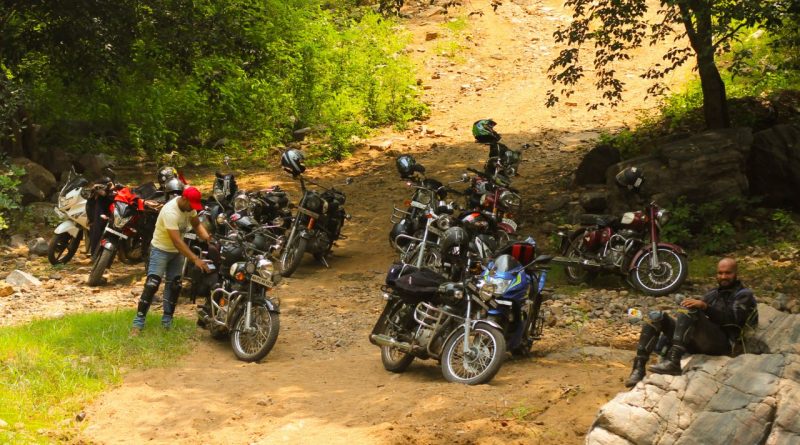 “Hmm… let me tank up. I might just ride tomorrow.”

“Umm…should I go for the ride?  I could just sleep later… I haven’t slept late for months.”

“You are riding to Dabbugalli, Anirban.”

“Oh come on. You have never done off-roading before. Can you pull it off?”

“That’s why. Sleep late, have some good food, get some rest.”

“Well, there is a first time for everything.”

“I am riding to Dabbugali and that’s it. Now shut up and let me get ready.”

Out came my knee pads and riding gloves, dusted off my riding jacket, packed my tank bag with the essentials, set the alarm for the morning and turned in.

The mind likes to play tricks with us sometimes. It tries to keep us in our comfort zone, snug under our blankets, enjoying a few more hours of beauty sleep and then keeps us second guessing and regretting all that we missed as we kept hitting the snooze button.

Road Thrill: Bengaluru just did a crazy off roader to Dabbugali. I had heard stories from JP bhai about how crazy it was a few years ago when the group had ridden there. I was not too keen on riding; in fact I was still recovering from a bout of illness the earlier week. Yet here I was gearing up at 4:30am, much to the chagrin of my so-called better judgement. Any last cobwebs in my mind about cancelling the ride plan and going back to sleep evaporated as soon as I started the engine.

We were not expecting a very big turn-out; off-roading is not meant for everyone. People had been warned: this was not going to be easy. Still, a fifteen-bike group for an off-roader was much better that we had expected. For quite a few of us, the off-roading experience began while getting to the start point at Kanakpura Road itself; the already dangerous road has become a nightmare thanks to Metro construction work. 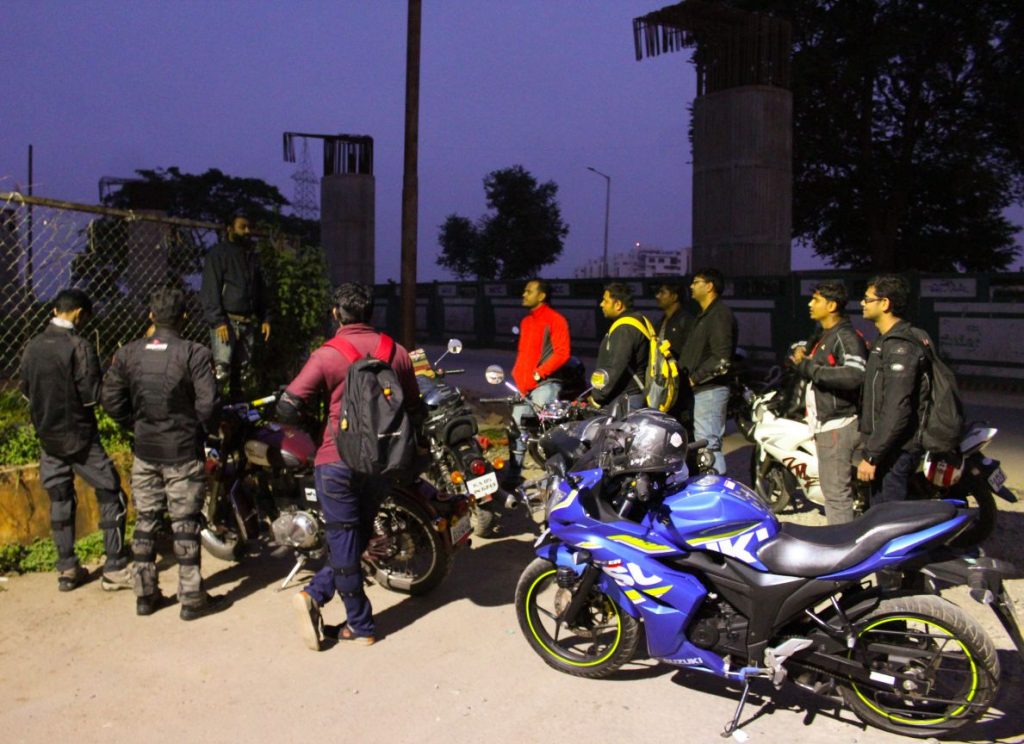 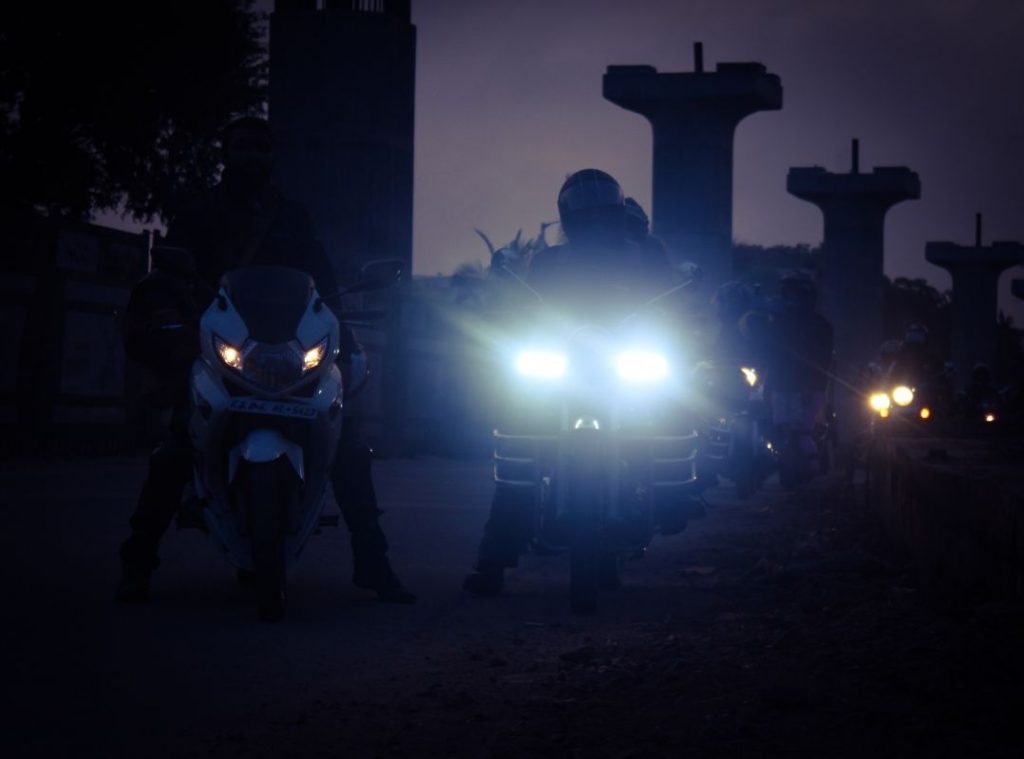 We started at the break of daylight, with RK Sir leading the way and reached Kanakpura in almost no time. A quick breakfast stop at Vasu Hotel followed by another quick pit stop at Hunsadahalli, and from then on the real fun began. 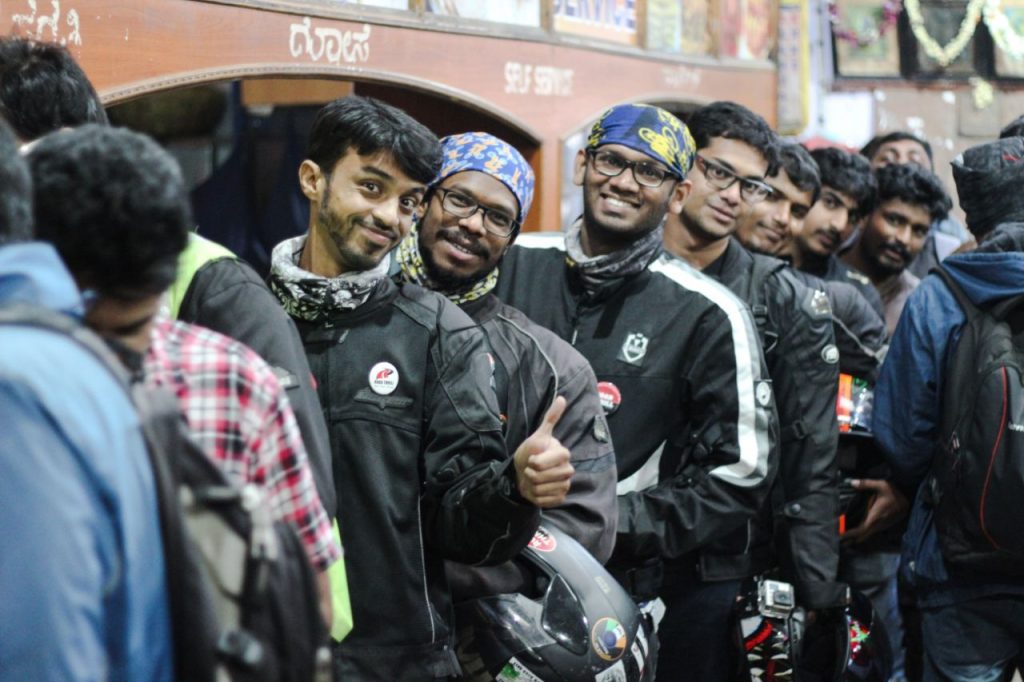 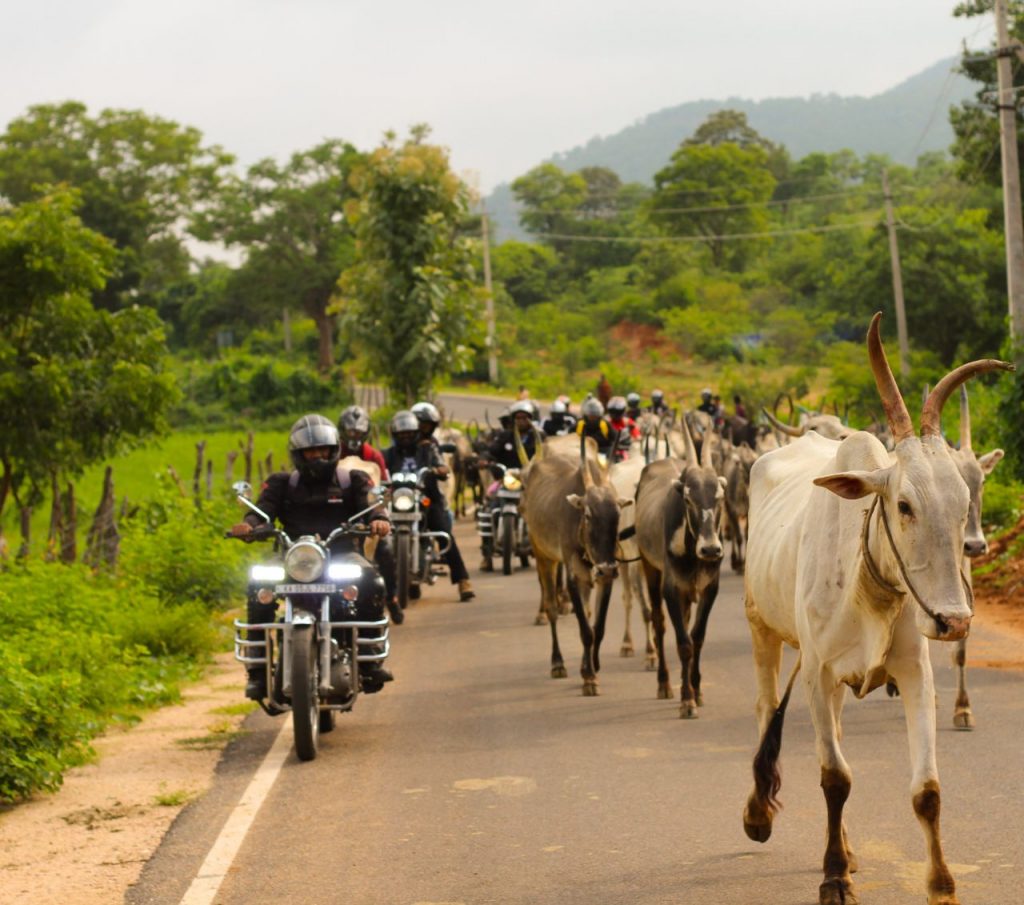 Riding through narrow but paved village roads, among lush greenery, fields and forests, we turned onto mud roads. Or more accurately, no roads! All of us struggled in some way or another. Self preservation instincts mean that one ends up pressing the clutch or front brake, or wringing the throttle at the wrong time, resulting in a fall. And we had our share of falls that day! We stopped for some photographs at a paved stretch. The road to the river bank straddles the TN-Karnataka border and in the words of RK Sir, “You’ll know you are in TN when the roads are paved.” We reached the river bank with some falls, skids, a bent footrest and a hell lot of reality checks.

Parking our bikes in formation at the waterfront, we settled under the shade of a mangrove tree and had the traditional discussion on what RT is all about, on upcoming rides and the introduction of our new members. We had quite a few new members and riding-with-RT-after-ages members with us that day. Among us and riding with us for the first time were seniors Mr. Omprakash and Mrs. Savithri; the couple has travelled, trekked and stayed all over India and even at the age of 68, Mr. Omprakash sir is still going strong on his Royal Enfield. Our hats off to his spirit and resilience; over the course of the ride he had five falls and still kept going strong. On the way back we took a different route and this was more of an uphill climb. The roads were just as bad, the climb was getting difficult for a lot of us. There were a few falls, overheated engines, loss of power, the smell of burning clutch plates and tappet noise (including mine) but finally we made it to the highlight of the ride: the stream flowing across the road and the water crossing. We parked our bikes and washed our faces in the stream. It was like an oasis in the middle of nowhere. 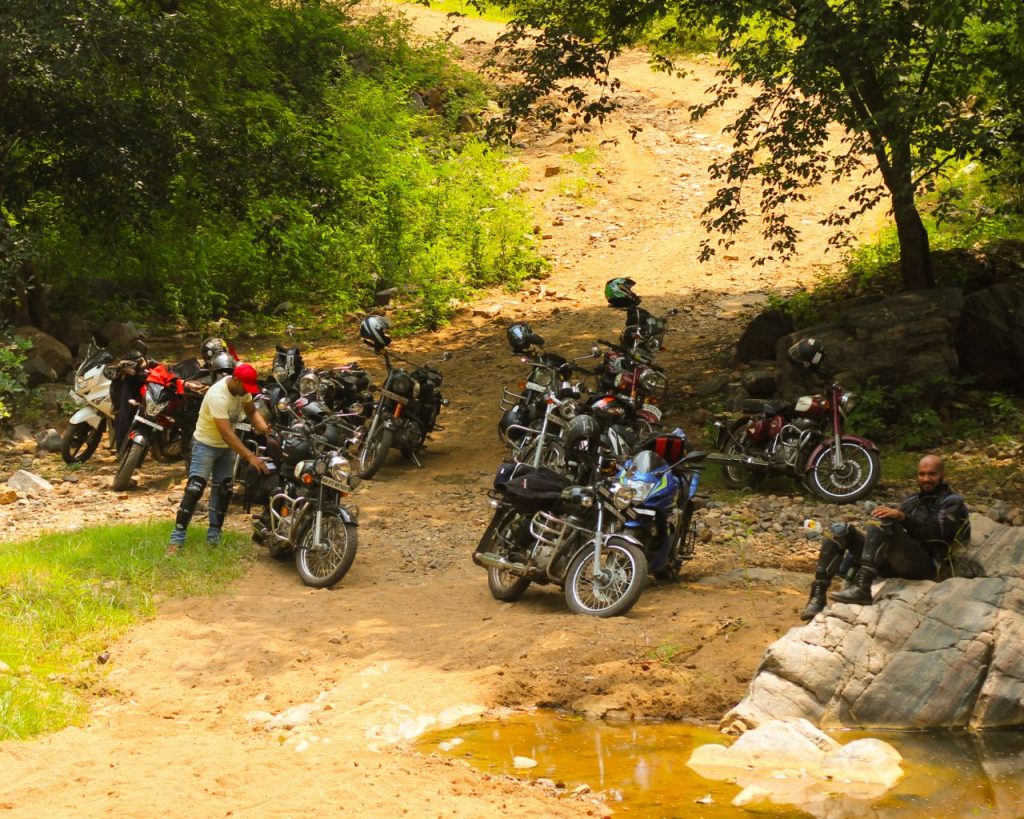 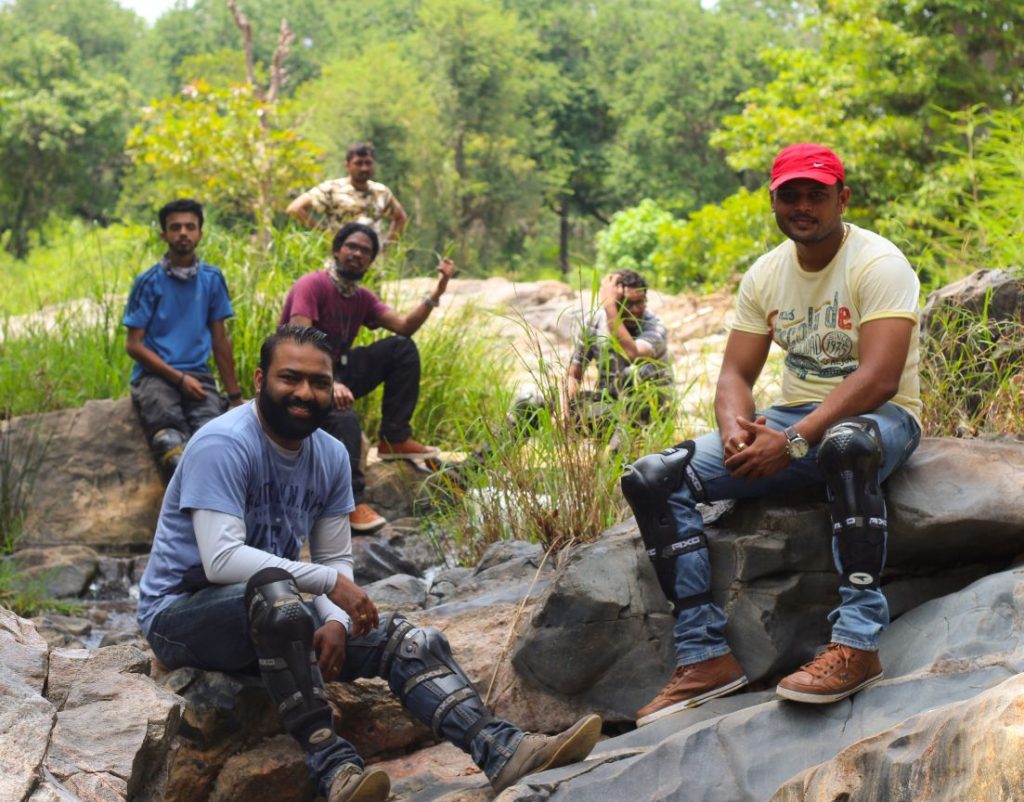 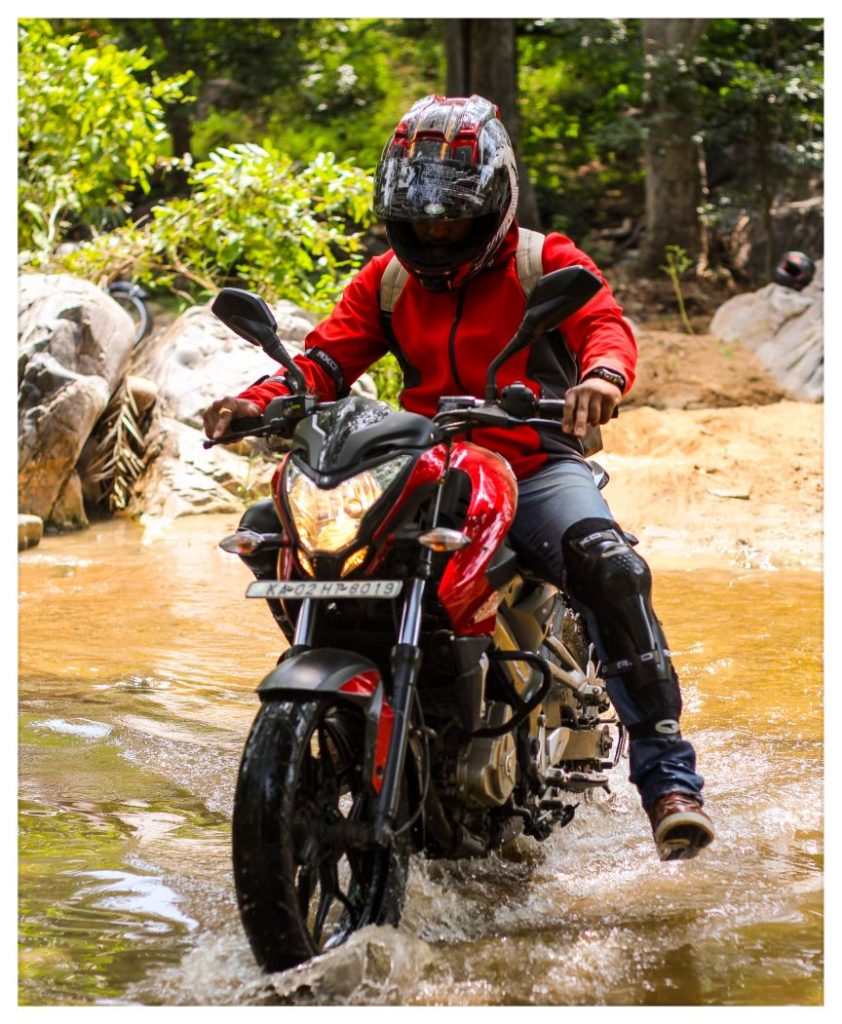 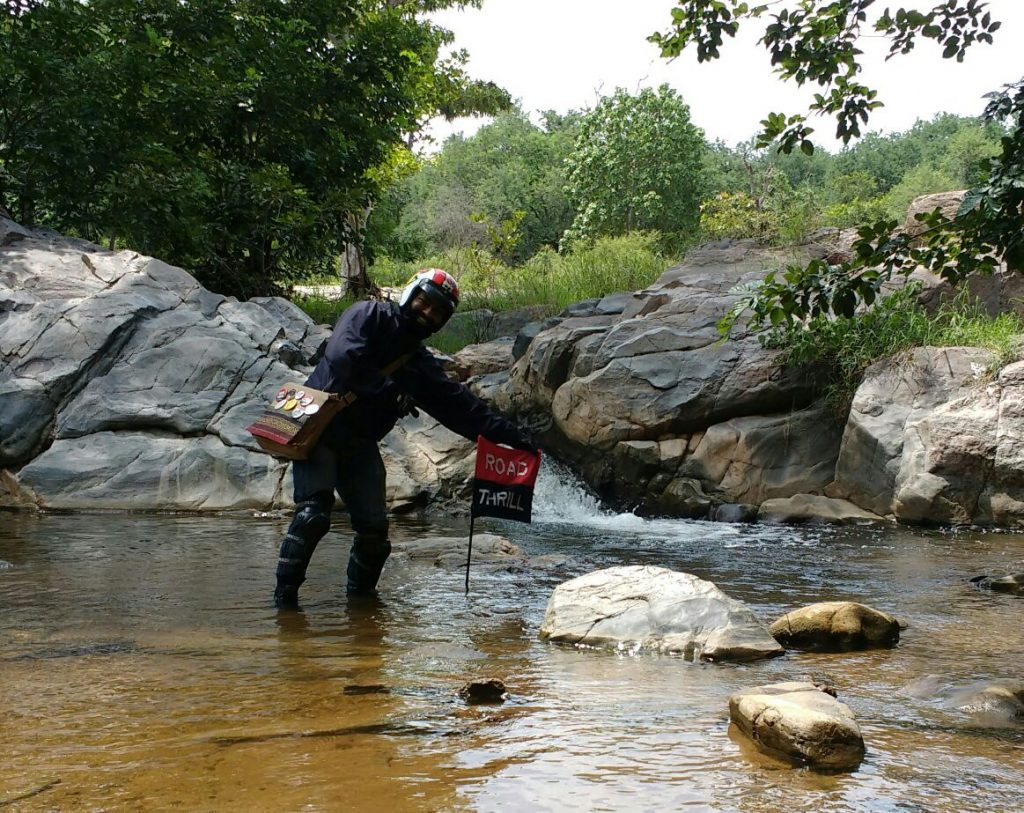 There was a bit more off roading at Dabbugali and then village roads and ghat sections led us back to Hunsadahalli village and then onto Kanakpura, where we stopped for lunch and relive what had just happened. And we were quite lucky not to have faced any punctures or breakdowns in the middle of nowhere.

As we were dispersing after lunch, I realized all of us and our motorcycles came back from the ride changed in some way or another. Whether the bruised egos or bent footrests, aching bodies or overheated engines, increased confidence or just plain old fun. As for me, I was glad I kicked off my laziness and went along; I had a great time and so did everyone else I am sure! Road Thrill Delhi: Up North and Everywhere Over the Weekend