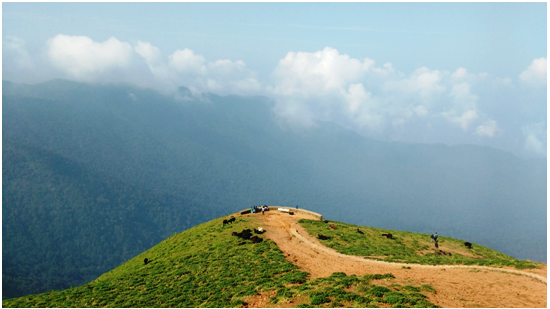 A Coorg adventure trip was on my to-do list since a long time, but it always got postponed due to other commitments. I am glad, it finally happened on  19th October, 2017. A friend of mine who stays at Srirangapatana confirmed that he would join me after deliberating for a while since it was raining heavily in Coorg. However, either of us didn’t want to kill our spirits. Thus, we did not back out of the plan. I woke up late at around 6:25am and I was running late. Going by the plan, I had to reach my friend’s place in Srirangapatana at 8am for breakfast. When my friend called I lied that I am in Bidadi sipping my morning coffee, whereas I was yet to leave my place. Come on ! Haven’t we all lied in this regard when our friend calls ?

After my coffee break at Bidadi, I headed to Srirangapattana and finally reached my friend’s place around 8:40. After our tummies were full we made sure my beast is fed well too. We stopped at the nearest petrol bunk and filled the tank for 700 Rupees.

Our first stop was at Chelavara falls which is about  140kms from Srirangapatana via the Hunsur-Virajpet-Nagarhole route. We reached Chelavara falls as planned and the scenery was surreal. However, the authorities didn’t let us get close to the waterfalls due to a recent mishap. Dejected, we headed to Talakaveri in Bagamandala, which was another 100kms from this place. 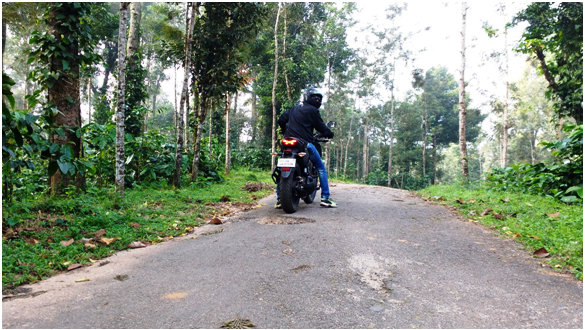 We made it to Bagamandala around 2pm and had lunch at Hotel Mayura which is maintained by the Tourism department of Karnataka. Post lunch, we headed to the place of origin of the river Kaveri. This is a holy place, especially for the Kodava community. The temple was crowded but it was an absolutely delightful experience as the whole place was covered with mist as the evening progressed and we could hear the sound of river Kaveri at its origin. We decided to head to Madikeri for the night. But the roads which lead to Madikeri, were in a very  bad condition, the scenic view all through the roads made up for it though. It was mind blowing !

On the way we clicked a number of pictures and finally reached Madikeri at around 4:30pm. We looked for rooms, after rejecting a couple of them for being overpriced, we settled for a room suggested by a kind man I met at a coffee shop.  We settled in our room and after relaxing for a while we set out to explore the city  during the night. As the shops were being shut early, we got our dinner parceled and headed back to the room. We spoke for hours over dinner and into the night until 12am as I was with my friend on a trip like this after 6 years. Realizing that it was late, we set an alarm for 6am and dozed off looking forward to visiting Mandalapatti early in the morning. It was indeed an amazing day 1. 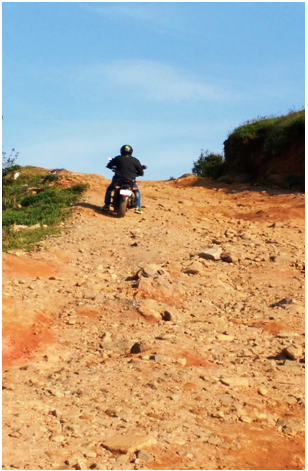 We again woke up late and rushed  towards mandalappatti at about 7:15 in the morning. It was sunny already. The roads that lead to the peak of mandalappati were getting worse as we got closer. We could see cars returning as they couldn’t make it through those roads. My beast did pretty well, even through those worst road pretty well. No wonder, I love him so much ! The only prize was the breathtaking view through those roads. Finally despite reaching late, the view at the peak thrilled us. Bad luck, we missed the fog, but the tough journey was totally worth it with a sight like that. 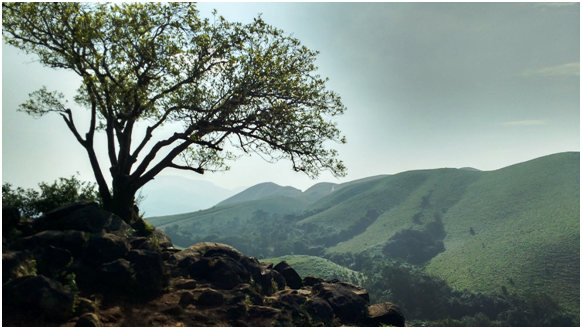 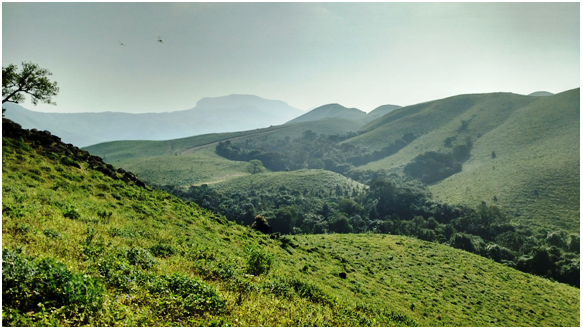 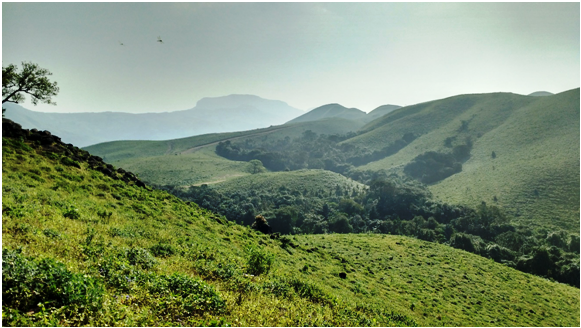 Our next stop on this Coorg adventure ride was Abbey falls, which was roughly 20kms from Mandalapatti. As it was a long weekend, the parking lots were too crowded. We finally found one, and decided to head to the falls after a quick break for bread omlette at a restaurant at 11am. 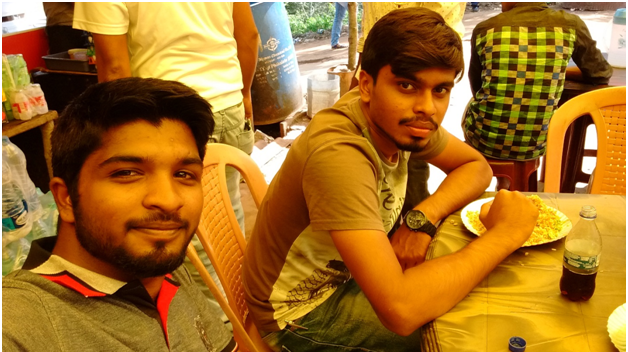 Abbey falls was an amazing place. Here as  there were no cops around, there wasn’t much restriction to play in the falls or click pictures. People were too excited to click pictures atop a dangerous bridge here. As it was getting late for us to head towards Bangalore, happy and content, we left Abbey falls. 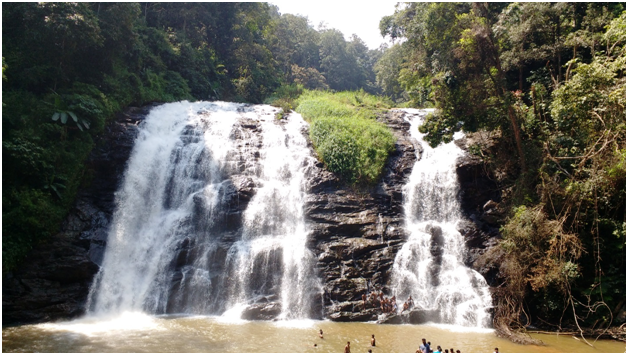 On the way back to our lodge, we visited Raja Seat which is in proper Madikeri city for a very short while. Back at our lodge, we collected our luggage, filled petrol again for 500 rupees and headed for Bylakuppe. On the way to Bylakuppe, my friend suggested that we visit Harangi reservoir as it is completely filled during this time of the year due to heavy rains. This place is about 8kms from the highway. After a quick stop at this beautiful reservoir, we headed to Kushalnagara to visit the famous Tibetian Golden Temple at Bylakuppe. 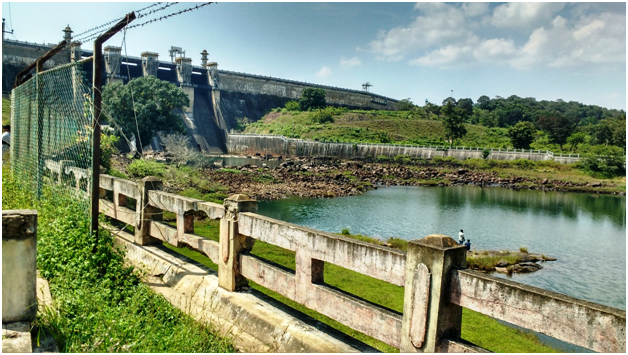 The golden temple at Bylakuppe was beautiful and peaceful. But, we couldn’t explore the whole temple as it was under renovation. We spent a few peaceful moments watching the prayers at the temple and since we were really hungry, we left for lunch.

We had lunch at a dhaba on the way back to Srirangapatana, again via Hunsur route. After dropping my friend off at his place and taking a break myself for about half an hour, I headed towards Bangalore. The journey from Bylakuppe to Srirangapatana  had slowed down as we were tired from the continuous travel. As I neared Bangalore, I got stuck in the traffic and took a less travelled route and messed up a bit. However, I safely found my way out and reached home by 7:45pm. Though tired, I was extremely happy and satisfied with this adventure of mine. The company of a good friend, my beast and the beauty of Coorg, what more could I have asked for ? 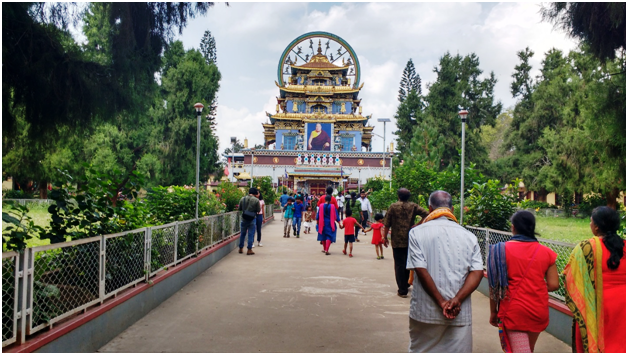 Thanks for reading peeps ! My beast and I will meet you again with another amazing adventure. 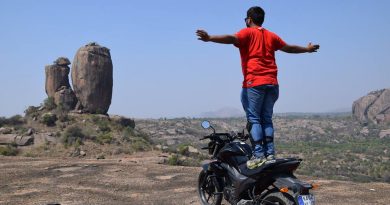 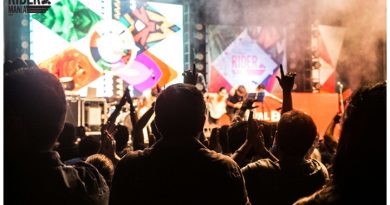